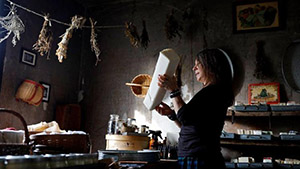 Maureen Anderson displays soap inside her home workshop in Toano Wednesday morning January 23, 2019. Anderson is the creator of Tasha’s Own, a soap that is made from goat’s milk. (Jonathon Gruenke / Daily Press)

Anderson started Tasha’s Own nearly 15 years ago in the Pungo area of Virginia Beach and now its handcrafted goat-milk soaps, healing salves, lotions and lip balms are known at local farmers’ markets and stores like Whole Foods, Earth Fare, Jamestown Feed and Seed, Mermaid Books, Lokal, Seasons of Williamsburg and Ace Peninsula Hardware. Her tallow soap is in Colonial Williamsburg shops and the apothecary line is at the Prentis Store.

A customer of Feed and Seed told her that the owner of the historic Dr. H.U. Stephenson house on Church Lane — built around 1889 — was looking for a tenant. That’s how Anderson got to know her landlord Jack Wray, who happens to be spearheading efforts along with brother Jeff Wray to preserve the homes of Toano’s founders along with plans to redevelop the commercial strip to attract more businesses.

Anderson, who makes herbal remedies, fits right in with the small-town character of Toano, Jack Wray said. Stephenson was one of historic Toano’s leading citizens and a prominent physician, said Wray, who is also president of the Toano Historical Society.

“She brings a lot to the table,” Wray said. “Everybody’s excited about having her in Toano.”

Anderson keeps goats, sheep, chickens and bees on the property. Tasha is the name of the first goat she ever bought, although she said customers often call her Tasha.

“I always loved having animals,” Anderson said. “It was a natural thing to go from keeping goats and a farm to making it my livelihood and my business.”

She makes Tasha’s Own soaps in the sunlight of the former maid’s quarters on the second floor of the historic three-story Victorian house. She spins yarn from wool by the wood stove in the living room and decorates the kitchen with bees wax discs and honey jars.

Visitors immediately notice the aroma of essential oils and dried herbs throughout the house. Anderson opens her home and large kitchen to attendees of her workshops, who recently dipped bees-wax candles and made old-fashioned lye soap.

Raising eight kids, Anderson said she had to learn how to be resourceful, but she boasts about how her children have surpassed her in their skills.

Anderson shares her experiences and projects with listeners by hosting “The Mother Vine” radio show on FM 93.5 The Burg.

Her next workshop called “Afternoon at the Farm” is noon to 4 p.m. Feb. 17. Workshops typically cost $125 per person. For more info, email tashasown@gmail.com, find Tasha’s Own on Facebook or visit www.tashasownherbarium.com.

Brothers Jack and Jeff Wray, who have experience developing properties, grew up in Toano and want to restore the unincorporated town to the essence of its bustling heyday in the late 1800s and early 1900s.

The Wrays own roughly 14 acres of property around the new Toano Commercial Historic District, including five historic homes that form the backbone of the commercial properties, Jack Wray said. The Wrays also own their grandfather’s store building, the W.C. Martin building, within the historic district.

The idea is to connect the homes and businesses in a walkable district with the proposed new construction of a mixed-use Toano Station across the street from the historic district. Wray said the widening of the roadway decades ago destroyed much of the historic character along Richmond Road.

Plans so far are conceptual and the Toano Station project would still need to go through a county rezoning process, he said. View renderings and look for updates at toanostation.com.